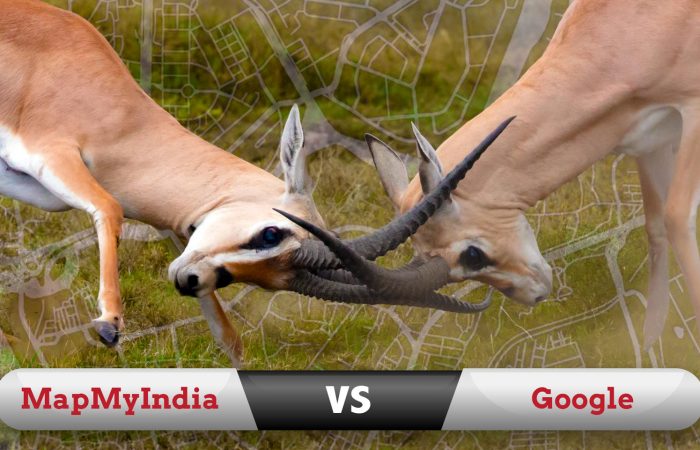 India Geospatial Data Liberalized: Is Google Maps in India Out?

In early February, 2021, amidst the global COVID-19 pandemic, India’s Department of Science and Technology (DST) declared that national, Indian-run firms would no longer need approval nor licenses in order to gather and disseminate topographical geospatial data.

This was a HUGE breakthrough for national companies of all shapes, sizes, and industries who have suffered from bureaucratic nightmares for decades. With legislation in place since the time of British rule, Indian companies were not allowed to freely access data collected by government entities, nor collect geospatial data on their own, without prior written approval, until now.

As if breaking free from their shackles, many road mapping and app creating companies are spreading their wings and preparing to soar.

None more so than the Indian owned MapMyIndia, a national technology company which specializes in building digital maps, providing telematic services, and location-based SaaS and GIS AI services. The company has already had considerable success since their foundation in 1992. And if they stay on their current trajectory, they have a very good chance at closing the distance between Google Maps in India and themselves.

But before we get into the nuts and bolts of that, let’s understand this recent turn of events and what it means for India in general. And to do that, we have to understand what geospatial data and all of the ways companies have found to put it to use.

What is geospatial data?

Geospatial data is geographical data which concerns assets or events. For example: a building, river, bridge, volcanic explosion, incidents of crime or poverty.

Geospatial data can be both static or moving. Examples of moving data is: the spread of a pandemic, weather patterns, a moving vehicle, or even a human.

Previously, all India geospatial data collected in the country by governmental agencies, such as security, law enforcement and the Survey of India, were not available freely for public use. If businesses wanted to access and utilize the data, they had to jump through hoops that involved a complicated chain of permission requests and paperwork.

Meanwhile, foreign companies, such as Google Earth, were able to collect and capitalize on this sort of data. This meant that foreign businesses were controlling most of the access to geospatial data, putting Indian companies at a huge disadvantage.

Here are some of the main points about the previous policy:

But as of mid February 2021, Indian companies will no longer be reliant on foreign companies for mapping data. Nor will they be forced to spend months filling out paperwork and getting stamps of approval to access the data.

There are still some guidelines and restrictions in place, set forth by the Indian government. But it will be up to the companies to police themselves and self-certify as following. The original statement released by the DST did state that there will not be any ‘no zones’. However, they have published a list of attributes which cannot be linked to the mapping data.

Some of these guidelines include:

Interesting, there are further restrictions for foreign companies

With the new rules, these geospatial data would be available without taking any approval from any ministry or government agencies. These six months would come down to nil.

Kumar is the managing director of ESRI India. And the six months refers to the standard length of time it took to jump through hoops and obtain governmental permission to access and use geospatial data.

While 70 years is not quite ‘sudden’, the change did catch many by surprise.

When the Modi government made the announcement, they acknowledged their primary reason for doing so. They believe that deregulation will (hopefully) be a step in the right direction towards two primary goals for India. The first is the country’s goal of reaching a GDP of $5 trillion. The second is establishing more self-reliance, otherwise known as AatmaNirbharBharat Abhiyan (Indian self-reliance).

According to the DST, accessibility of India geospatial data will

What that really means

So back to the original point – does Google Maps in India have to look over their shoulder?

MapMyIndia launched the first Indian interactive digital mapping portal www.mapmyindia.com in 2004. The husband and wife powerhouse duo, Rakesh and Rashmi Verma, faced the decision of whether to take on Google Maps at that point in time. They decided to go the enterprise route, and business shot off from there.

They then progressed to a GPS navigation service called Road Pilot in 2010, which came preloaded with villages, towns, and cities throughout India.

Since then they have expanded their services to navigation, tracking analytics, web mapping, and IoT for desktop and mobile devices. Their navigation comes packed full with turn-by-turn navigation, spoken instructions for vehicles, public transit information, and street view. The offline app offers 3D terrain and city models.

In addition, they have expanded to neighboring countries such as Sri Lanka, Bangladesh, Bhutan and Nepal.

Some of the top national and international developers and tech companies, such as Amazon, Paytm, Alexa voice, Uber, Ola, Grofers and many more already utilize the newest technology – cloud mapping. It is also employed by government agencies like the Central Board of Direct Taxes.

How does MapMyIndia Compare to Google Maps in India?

While Google Maps certainly is the most popular and ubiquitous map and navigational service used to date globally, MapMyIndia is already giving Google Maps a run for its money. Estimates put Google Maps’ market share at about 62%-67% worldwide. MapMyIndia claims an astounding 80% of the market share in location intelligence space and 95% for the GPS navigation in India. That mostly consists of top automakers such as BMW, Tata, Honda, and Toyota

Remember that India is currently the second most populous country in the world at 1.38 billion, only slightly behind China (1st place) and leaps and bounds past the United States in third place. This puts India’s population between 15-20% of the whole world population according to 2020 calculations.

While at the moment, many Indians use Google Maps as well as MapMyIndia, if they start to shift to ONLY MapMyIndia, and the platform itself starts to spread, Google Maps will certainly have to keep an eye on them.

Problems with Google Maps in India

How is MapMyIndia better?

‘Made in India’ has home field advantage, support of the state, and a desire to put Indian companies first.

There are features such as voice guidance and live locations sharing.

It can track your phone’s location if logged in from multiple devices.

Users are already very excited about the extreme level of geospatial details achieved by using MapMyIndia rather than Google Maps.

Another hugely impactful feature is one which allows users to report bad traffic and roads, which reflects in real-time.

We know India better than everyone.

While Google Maps is reliable in big cities, MMI beats Google Maps in more remote areas. They claim that they have mapped 6.5 million kilometers (4 million miles) of road over the last 25 years, driving to each corner of the country.

Top MapMyIndia execs speak to the quality and richness of the data which they have acquired over this time. Their curated data for businesses is one of the key factors which entices other companies to choose MMI’s API rather than Google’s.

Commitment to privacy. For now MMI says it won’t be using ads as a form of revenue and will focus on users’ privacy. They currently have a sustainable business plan, with good returns for investors and cash reserves. Their current revenue comes from licensing map products, its services and solutions.

How is Google Maps better?

Strong partnership ecosystem and dominance of real estate in the consumer space. Google has been working with partners and serving customers around the world for nearly 2 decades. In that time they have amassed an astounding amount of clout and data.

Data is beneficial on several fronts. For one thing, it’s extremely useful for developers for building maps, routing, or visualization purposes.

And second, something we probably already know at this point, Google has TONS of consumer data which many companies exploit for ad revenue.

Sanchit Vir Gogia, founder of Greyhound Research, a tech consultancy firm, says that it is possible for MMI to increase their data by extending partnerships to last-mile connectivity and allowing the sharing of real-time traffic data.

Google is the go-to app for many businesses. At this point in time, the majority of delivery services and drivers still tend to use Google Maps, and habits are hard to break.

How is MMI can improve

Changing habits is always a difficult procedure, but there are some ways in which MMI could improve their services and entice drivers, logistics companies, and others to make the switch.

This includes supporting more local languages, finding a better solution to traffic issues, or using intuitive technology to help locals communicate more effectively with one another.

CEO Rohan Verma himself reported that their solution will differ from Google Maps and other foreign mapping apps in that it will be more detailed and comprehensive, privacy-centric, and hyper-localized.

So does MapMyIndia have a fighting chance?

With the newest changes to India geospatial data policies, there are high hopes that MapMyIndia can finally have a fighting chance and compete with the Goliaths.

Their partnership with Indian Space Research Organisation (ISRO), a governmental organization, has left many experts believing that the local company could gain incredible added value and benefit greatly from this liberalization.

Verma said MapmyIndia’s user maps, apps and services would “integrate with ISRO’s huge catalogue of satellite imagery, and earth observation data, and would be much better.”

Locals immediately jumped at the chance to throw some shade at Google Maps. They posted images with the hashtag: ‘When you follow Google Maps in India’ as seen below. Check out some of the more hilarious depictions resulting from drivers having followed poor directions.

Let us know if you have experienced anything similar in India, or anywhere else due to following Google Maps. And what are your predictions – will MapMyIndia become one of Google Maps main competitors, both within and outside of India?