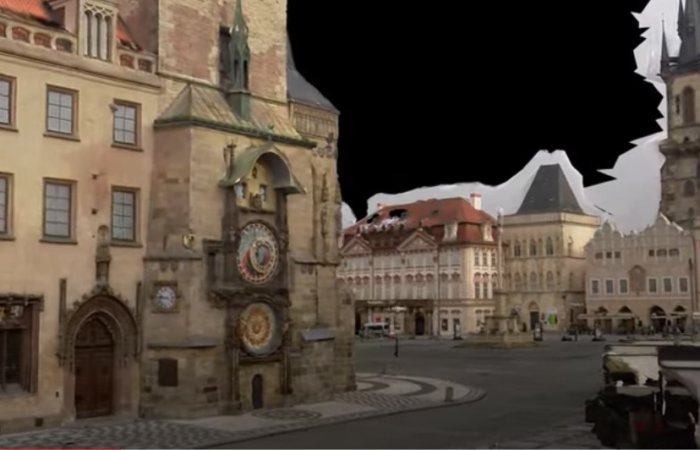 LiDAR vs Photogrammetry: Which is better for point cloud creation?

What’s the best technique for creating a point cloud? Let’s face off lidar vs photogrammetry and find out.

What is a point cloud?

A point cloud is a set of points in space that represent the surface of an object, which can be used for many different things. The points are typically created by a 3D scanning method, such as LiDAR or photogrammetry, which measures the distance between the scanner and nearby objects. These two methods measure the objects in question with different tools – LiDAR uses lasers, while photogrammetry uses photographs.

Point clouds are also often used to create high-quality maps of city environments or to provide accurate topographical information about natural terrain. This data type is also often used as the foundation for creating digital versions of real-world objects – large and small.

When or how do you use a point cloud?

Before we get into how these two methods – LiDAR and photogrammetry both separately create point clouds – let’s look at a few industries and use cases for point cloud creation.

Just to give a few examples of how each of these industries might use a point cloud specifically for their needs, let’s have a look.

Use cases for point clouds:

How can you create a point cloud?

As we stressed earlier, there are two types of technologies that can be used to create point clouds. LiDAR uses lasers in order to measure distances from the sensor to objects in the environment. Photogrammetry, on the other hand, uses photographs taken from various angles of an object in order to calculate its dimensions and generate a 3D model by using triangulation.

Both technologies have their strengths and weaknesses, their pluses and minuses. It has a good deal to do with your budget and with the size of the area or object that you are attempting to make a point cloud of.

Let’s get into which option might be the better option for you and your use case. Allow us to walk you through understanding where each one shines and where it ‘fails’.

What is LiDAR and how does it work?

LiDAR stands for Light Detection and Ranging (or one of several other definitions, and it is also written several different ways, so don’t concern yourself too much with that).  It’s a technology that uses lasers in order to measure distances from the sensor on the LiDAR device to objects in the environment. LiDAR is a geomatics method that measures distance to the object – whether it be the Earth’s surface or an apartment building – using laser light in the form of a narrow pulsed beam emitted from a single laser source. It can be contrasted with radar, which uses radio waves instead of lasers, or reflector-less laser scanning, which does not use pulsing.

A laser scanner combines a laser rangefinder with rotating mirrors and an inertial measurement unit. The earliest affordable consumer LiDARs first appeared in the early 2000s. These devices can be found on a whole host of vehicles. They are sometimes found spinning on top of high-end commercial UAV (unmanned aerial vehicle) platforms employed by film makers for aerial survey work. Or they are part of a mobile mapping system (MMS), placed atop a car, van, or truck.

The high level goal of LiDAR remote sensing is to measure the distance from the sensor plane to points on an object’s surface at regular time intervals and relate these measurements back to their coordinates in space and time. These measurements may be used as input into higher level algorithms and applications, such as feature extraction, change detection, classification, or image modeling.

What are some uses of LiDAR?

Like we said earlier, LiDAR is used for some sort of survey. Whether it be for a private construction company, a municipality, or a team of researchers.

LiDAR is used in a great deal of industries such as:

LiDAR can be used to scan and create 3D models of:

Within those fields, LiDAR technology can be used in a number of applications including:

LiDAR is often used in autonomous driving, so it’s important for these vehicles to be able to map their surroundings in order to avoid collisions.

In order to create a point cloud with LiDAR you need the following tools and software:

What is photogrammetry and how does it work?

Photogrammetric technologies now extensively use digital cameras and digital computer techniques to measure distances between photographed objects and to enforce those measurements. But that digital camera can come in many forms from your smartphone, to a standard DSLR or even a drone.

In order to create a point cloud with photogrammetry you need the following tools and software:

Photogrammetry can be done by any normal person, you, me, …..maybe not your grandmother unless she’s pretty savvy with the computer.

The first steps are pretty simple:

What are some uses of photogrammetry?

Just like LiDAR, photogrammetry is used in many industries, including surveying, engineering, construction, manufacturing, geophysics, and archeology.

With the data gathered with photogrammetry technology, the end-user can:

Some specific uses within the above mentioned industries are:

Mosaic CEO Jeffrey Martin was even able to lend his hand during a recent fire disaster in Prague, which completely destroyed a historical landmark. Check out his 3D model of the church which will help historians recreate the 17th century wooden church.

What are the core advantages and disadvantages to LiDAR vs photogrammetry when creating point clouds?

LiDAR has many significant advantages (especially over photogrammetry).It is used extensively in different industries for various purposes. Its advantages include high accuracy, 3D imaging, and high-resolution. Here are some of the most important competitive advantages it has:

LiDAR has certain disadvantages when it comes to creating point clouds. One is that it can be an expensive technology to use. It also requires a lot of hardware, which can be difficult to transport and set up in the field. LiDAR often produces very dense point clouds, which can make data processing and downstream analysis more challenging. Additionally, LiDAR data is often not suitable for use in real-time applications.

One of the main sources of error for terrestrial LiDAR systems comes from distortions in the laser beam caused by atmospheric turbulence. These distortions cause the laser light to spread out as it travels through the atmosphere, which can result in inaccurate distance measurements.

The disadvantages of LiDAR include:

Aside from atmospheric effects, other factors that can impact LiDAR measurements include:

Calibration and validation procedures help to account for and remove the impacts of these factors on data accuracy.

Photogrammetry has a number of advantages over other measuring techniques.

Despite the low costs and low barrier to entry, there are of course some drawbacks to photogrammetry. These include:

What is the difference in time needed to create point clouds:

Which is faster to collect and process data: LiDAR vs photogrammetry

One of the more common questions asked in regards to which is better for point cloud processing is: which is faster? There are two parts involved here: the actual data capture and the time needed afterwards to process the data and receive the desired results.

Which is better for creating point clouds: photogrammetry or LiDAR?

As seen above, there are several pluses and minuses to both techniques when creating point clouds:

While both photogrammetry and LiDAR can be used to create point clouds, they both also have their pros and cons. Photogrammetry is much slower than LiDAR mapping because it takes hours or days for photogrammetry software to create a 3D model from a set of photographs, while LiDAR technology can capture data in seconds and process nearly as quickly. The quality of the data produced by photogrammetry depends on how many photos are taken from different angles, so poor quality images can affect the final result – whereas with LiDAR there’s always high accuracy because lasers bounce off surfaces directly back to a sensor.

The biggest difference in the output from both techniques is color. Point clouds made with photogrammetry have an RGB value for each point. Or in common speak: they images you see represent the original image in color in a photogrammetric point cloud as seen here:

Rather than this very cool, but less realistic representation we get with a LiDAR point cloud:

So what will it be?

Stay tuned for an upcoming article on large-scale photogrammetry at scale, with easier data capture than traditional methods.