Alternative to Ladybug5: 10 Reasons to Replace Ladybug with Mosaic

Move over Ladybug: there’s a new 360° camera for spherical image capture in town. See how the Mosaic comes out on top in every way imaginable.

Mosaic is the Ladybug 5 Replacement for 360° mobile mapping

Once seen widely as one of the top 360-degree cameras on the market, consumers are now looking to replace the aging, legacy Ladybug 2,3, and 5 models with something newer and better. For those surveying firms, insurance companies, and utility companies looking for an upgrade for the Ladybug 360° cameras, then you’re in luck.

Creating an alternative to the Ladybug 2, 3, or 5

It was no small feat to go up against the Ladybug 2, 3 or 5 models, which were popular 360º cameras utilized by nearly everyone from mapping companies to university robotics labs to surveying firms. Over the years it has been well respected as the go-to camera for these and other solutions.

However, since the latest release in 2017, the Ladybug 5 series was acquired by FLIR, a developer of technology for industrial, commercial, and defense markets. And then only in 2021, it was acquired by Teledyne. Following both of these acquisitions, there has been no talk about updating the Ladybug 5 or releasing a different model. It seems to be an “end of life” – it’s already 2022 and there is no technical support in sight – that is what our customers say.

And so those currently in possession of any model of the Ladybug 360 cameras are searching for an alternative that will surpass this outdated device.

This is where Mosaic steps in. Founded in 2020 by world-renowned gigapixel and 360 photographer Jeffrey Martin, the company sought to create a better mobile mapping camera than what was previously being offered.

How Mosaic solutions are better than the Ladybug 5

While there are several models of the Ladybug, we’re going to stick to analyzing the Ladybug 5+ – the newest and most up-to-date version.  A quick breakdown of the top 10 features where the Mosaic solutions outshine compared to the Ladybug 5+.

Better features for a better camera

The purpose of a camera is to capture an image, and a clear one at that. While mobile mapping cameras have been mainly focused on getting the highest accuracy in terms of geo-location, they have ceded slightly on the clarity of the image. The Mosaic 360° cameras reject the idea that image clarity should be overlooked or ignored.

In order to produce maps that present every last detail, from cracks in the road to street signs, HD resolution is a must. An increase by 50% in the megapixels allows for true-to-life images to be captured and displayed in the final presentation.

Many current users of the Ladybug 5 (+) have mentioned that while the Ladybug was good for the general view, it does not offer high enough quality when they needed to zoom into images. We offer the best solution – a 360º camera with 12K lenses which provides you with the best quality data on the market. 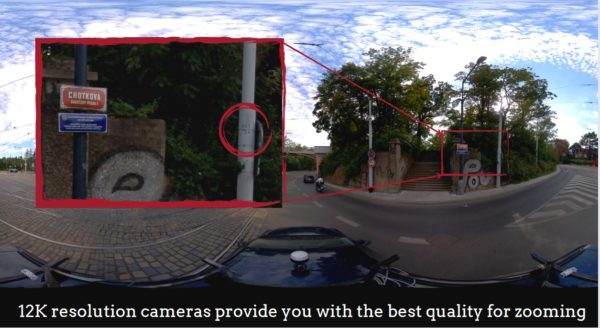 To check out some of the incredible images, videos and 3D reconstructions made with Mosaic cameras, check out the media and gallery page and follow us on YouTube.

Mobile mapping is a particular industry which requires that its technology and devices operate in some non-ideal situations. That’s why Mosaic designs our cameras so that they are waterproof, offering our customers the confidence and security that if their vehicles are caught in a rainstorm or are just operating in an extremely humid, tropical environment, they will still perform.

Security is another key element of mapping and surveying cameras. As these cameras are collecting detailed information of the conditions of streets or buildings or train tracks, they are also inadvertently capturing sensitive details such as people and license plate numbers. In order to ensure the utmost security and GDPR compliance, we built our solutions with security in mind from the very beginning.

The Mosaic 51 comes with the option for data acquisition with 256-bit encryption available right out of the box. That means you can hoist the camera atop of your vehicle and get to work capturing data. With our client’s request, we can ensure that not even the driver or camera operator will have access to the files created by the camera.

Most cameras in this category, including the Ladybug 5+ require a connection to a full workstation while running and capturing images. This means a powerful computer and all of the wires and cables, a power source, and a technician inside the vehicle at all times in order to gather the data.

The Mosaic cameras have removed all of that unnecessary and draining equipment by installing a powerful computer inside the camera itself. The main processor combines a powerful CPU plus two GPUs, which allows for control of the camera, as well as file compression and makes it capable of object detection and recognition.

You read that right, that’s two GPUs, delivering 3 Teraflops of compute capacity. No other camera on the market, including the Ladybug 5+, offers such computing capacity.

The IP rating, also known as the International Protection Rating or Ingress Protection rating, is a system of rating the protection for the equipment inside an enclosure. Each number correlates to a particular substance. IP67 is the most common rating found among the connectivity market.

The first number indicates the level of protection that the equipment has in regards to the ingress of solids. In this case both Mosaic’s solution  and the Ladybug 5+ rate a ‘6’, which is the highest on the scale. A ‘6’ means they are both ‘dust tight’ in which no dust can enter the piece of equipment and they are both completely protected against contact.

While we hope that our typical client is not regularly capturing images while driving through flooded streets, there are so many use cases we haven’t come across yet, we wanted to make sure our camera was prepared for anything.

A hot swappable storage unit is a huge added advantage to any device. Being able to replace the storage unit onboard with a new one without shutting down, stopping, or rebooting the system is extremely beneficial. It increases efficiency, usability, safety and decreases costs for the users.

With hot-swap technology, our 360-degree cameras solutions are much more nimble and flexible than many other 360-degree cameras, such as the Ladybug 5+. It reduces the need to carry a charging station or source of power in the vehicle and the camera can work without having to ever shut down solely for the purpose of swapping storages.

LiDAR (laser imagining, detection, and ranging) is a remote sensing method which creates a map in 2D allowing technology such as computers, robots, and self-driving cars to perceive the world around them in 3D.

This technology has been around for over half a century and has been used in a whole variety of technologies. It is of particular interest to manufacturers of driverless cars to be able to train the cars to ‘see’ the world around them and react as a human being would do.

The Mosaic cameras are the only one in their class which comes ready for deep LiDAR integration, a must-have feature for any 360-degree camera these days.

Not only did the Mosaic team build a camera, but we made sure to design a robust car mount which offers security while driving with such a valuable piece of equipment on the top of your vehicle. We offer stainless steel camera mount plates as well so that you have all of the equipment necessary to get up and running.

Computer on board: no/yes

No need for a computer to be stored, charged, or running within the vehicle at any point during the operation of Mosaic cameras. While many mobile surveying cameras require an on-board computer to be connected to the camera at all times in order to operate the camera as well as gather and collect data, this is not the case with our 360 mobile mapping cameras. No additional equipment is required, so operating the camera is much more energy efficient and man-power efficient, as only one solo driver is necessary to go about collecting data.

And last but certainly not least, GPS. While a standard camera may not need to concern itself with GPS, for a 360-degree mobile mapping camera for surveying, driverless cars, and railway companies, Global Positioning System is an absolute must.

Mosaic camera solutions come with high end centimeter-precision GPS, connecting up to 4 GNSS networks at once. There is an active dual-band antenna which gives a fix in seconds and is able to determine precision location even in urban canyons. With Dead Reckoning, it can even capture positioning when in tunnels or indoors for nearly 15 minutes and at sub 5-meter accuracy.

While we just spelt out for you all of the ways that our Mosaic solutions are better than the Ladybug 5+ we don’t want to take away from the fact that the Ladybug 5+ was a great camera and is part of our own foundation. Other cameras and other competition along the way have driven the Mosaic team to develop a better camera which can offer all of the best features from precision GPS to ultra HD quality images to security, usability, and functionality. Mosaic is determined to provide businesses in all industries with a tool that will satisfy all of their needs and lead us into the next level of data collection. Find out more by contacting our sales team if you are looking for an alternative to any of the Ladybug models – 2, 3 or 5 – or any other 360 mapping camera. We look forward to hearing from you.

CONTACT US
PrevPreviousMosaic at InterGeo 2021 and beyond – taking to the streets and the skies
NextVirtual Sets and Studios – what are they? How do you make one?Next