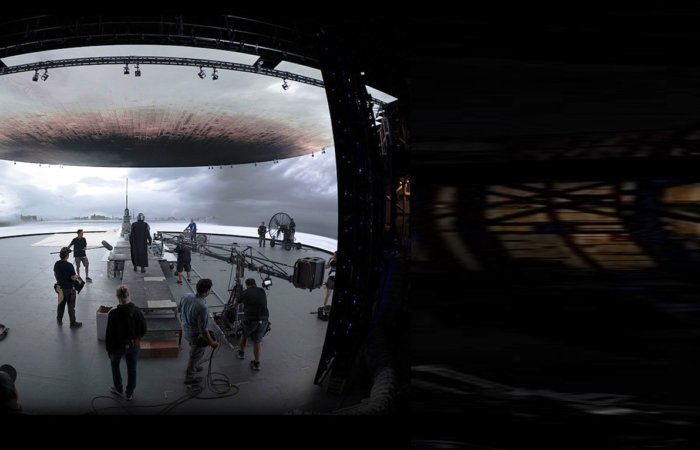 Virtual Sets and Studios – what are they? How do you make one?

If you’ve seen the Mandalorian and you’ve wondered why it looked SO REAL, then you have come to the right spot. Learn how the Mandalorian utilized a breakout technology – an in-camera virtual set – to bring the most life-like experience to viewers around the globe.

The Evolution of Filming and Use of Screens

To fully appreciate how far we’ve come since the invention of film and the film industry (just over a century old), let’s have a look at the evolution of film, in particular – how directors created backgrounds when they were not able to film the scene live.

Single screen behind an actor

No, that is not your eyes deceiving you – that is a virtual set. The walls and ceiling are dozens upon dozens of LED screens fitted together and displaying an incredibly clear, true-to-life environment for the actors to ‘play’ in front of.

With the touch of a few buttons, the director can change that gorgeous twilight sky into a fiercely bright midday blaze.

What is the difference between a set and a virtual set (or virtual studio)?

A virtual set is a collection of several extremely novel technologies which project a life-like environment onto LED screens located behind actors while filming a scene for a movie or TV show (these are the two biggest uses now, but theoretically any sort of film production – including commercials, news, etc will most likely benefit from this technology in the not to distant future).

A virtual studio allows for real objects and real people (actors) to seamlessly interact in real-time with computer-generated environments and objects.

What is virtual production?

The key element of a virtual set comes in the way that the real-life camera that is on set can move in 3D space, while at the exact same time, the image coming from the virtual camera is being rendered from the same perspective. The different camera settings – pan, angle, zoom, traveling – can adapt at any time to be in tune and in line with the action of the actors.

Unlike the other technologies used until now, virtual production is done in real-time and does not require post-production work.

Virtual sets are already becoming the norm in many high-end film productions due to the many benefits and very few drawbacks.

The benefits of using a virtual set

How to create virtual sets

Let’s look at the technologies as well as the steps and the people needed to create a virtual set.

There exist many technical solutions for creating virtual sets and studios, but most of them include the following components:

Optical or mechanical measurements are used in camera tracking to create a live stream of data describing the exact perspective of the camera.

While the actual steps and processes involved are much more complicated then what can be covered here, we will focus on why this affects Mosaic. For a more thorough understanding of the ins and outs of creating a virtual set, check out this incredible article here. We will stick to what we know – data capture – and why we’re so excited for the applications of our Mosaic cameras and mobile mapping services for something as exciting and innovative as in-camera VFX on virtual sets.

Hopefully at this point we all understand that a virtual set is basically the way in which actors can film in front of a flat backdrop but feel as if they are in an actual, real scene. The imagery which is displayed on those LED screens has to come from somewhere though, right?

Who is behind creating virtual sets?

There are several methods of achieving the images to be displayed on virtual set LED screens.

This is where we get involved and why we’re so amped up! The images portrayed on these screens have for now been created through the hard work of 3D graphic artists and 3D computer graphics software who create virtual backgrounds and all of the bells and whistles that go along with making a scene look real.

The Mandalorian in particular used images and environments sourced from Unreal Engine – which is basically a library for super advanced, super real-time 3D creations. Up until now, this technology has been used mostly in the gaming industry for those almost-too realistic first player shooter games.

But Mosaic cameras, with the highest resolution camera array in the world, are capable of collecting 3D environments at a much quicker and efficient manner than 3D graphic artists can create them.

With image capture abilities from a camera array which is expertly synchronized to collect a full 360-degree view of the surrounding area, film production has a brand new tool at their disposal. They can effortlessly gather real-life data in almost no time at all, thereby reducing time and resources significantly.

Check out some of these videos captured by the Mosaic Viking – the world’s highest resolution camera.

The future of film production

Certainly, 3D artists, VFX specialists and complementary software will be necessary when creating the content for films or shows which are set in unreal places. For situations such as those, the virtual environments will need to be carefully crafted to meet the demands of the directors, producers and writers.

However, for scenes which are set in real-life places – downtown Hong Kong, the middle of Santiago Bernabéu Stadium (Real Madrid), or the depths of the Amazon forest – there will be a much faster, easier and cost-efficient manner in which the image data is collected. If you are interested in more information about the Mosaic line of cameras or our data collection services, feel free to drop us a line below.

PrevPreviousAlternative to Ladybug5: 10 Reasons to Replace Ladybug with Mosaic
NextThe Top 5 Mobile Mapping Systems That Will Dominate Geospatial Technology in 2022Next