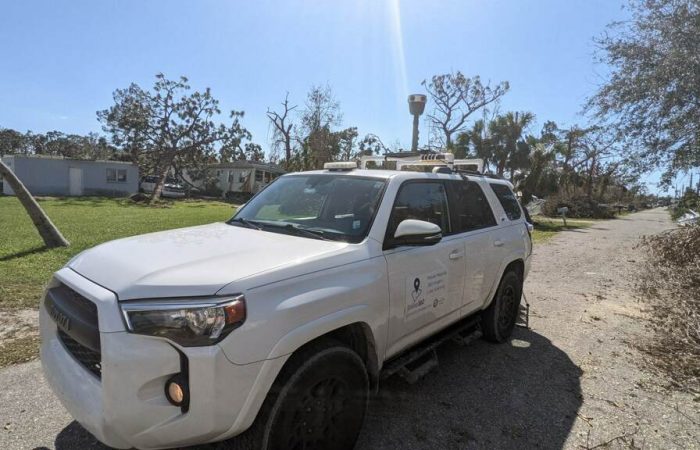 Case study: How to get street-level imagery live overnight

“I would estimate our workflow speed increase, about double to quadruple.“

Keep reading to find out how.

Site Tour 360 is a reality capture and mapping consultancy, specializing in a number of geospatial focused projects including creating custom workflows for capturing and publishing large scale 360 imagery collections. In addition to documenting natural disasters and working with utility companies, Site Tour 360 also  works directly with the Google Maps & Google Street View teams to provide rapid updating services to those platforms. Most recently, Site Tour 360 was called upon to document the large-scale destruction brought by Hurricane Ian’s landfall on SW Florida.

It was this last endeavor that this article will focus on today and how Co-Founders of Site Tour 360, Mike Vorce and Dylan Faraone, have developed a powerful workflow for collecting, processing, and delivering the reality of large environments post disasters to their customers.

This new workflow has incredibly consequential outcomes, with the potential to assist decision makers within organizations such as FEMA and the National Disaster Preparedness Training Center, better understand and deploy aid to places in need at the moment it is needed.

Their solution combines their decades of experience in geospatial, 360º photography, and network surveying along with Mosaic’s original robust and user-friendly 360º mobile mapping camera – the Mosaic 51 – plus post processes that get the street-level from captured to displayed in less time than ever before.

What was the problem they were facing?

Both Vorce and Faraone commented on several key failures or features lacking in other 360º cameras that they had used.

Vorce responded that several of the other most common 360º (mobile mapping) cameras had some “quirkiness” and “wasn’t as dependable” or were “a little clunky to use.”

“…after shooting all day and you look at your data and your routes and there’d be imagery and there was no indication from the camera that there was a problem and that was a massive headache.”

Dylan Faraone remarked that mobile mapping cameras and systems which are vendor-locked, “had been a problem for us and for our business model. We’re not trying to lock our customers into anything.”

Another big source of strain had been the camera’s power source. One of the previous solutions Site Tour 360 had worked with proved to be very problematic when it came to using the suggested power supply options, requiring frequent rebooting or complete failure to power up. Vorce commented that on the other hand, the Mosaic 51 “works flawlessly with the V-mount batteries as suggested.”

What was the mission?

Originally the grounds for acquiring the Mosaic 51 was to try out the capabilities on a RFP (Request for Proposal) they had gotten from a large utility company and they decided that it was the time to try out a new technology.

But as (bad) luck would have it, Hurricane Ian hit Florida, where Site Tour 360 is based, and specifically SWFL (Southwest Florida) where Dylan grew up and has friends and family there, only a week or two after they received their first Mosaic 51 camera.

Hurricane Ian is now the deadliest hurricane in the continental United States since Hurricane Katrina in 2005. It made landfall on September 28 along Florida’s gulf coast at Category 4 strength, with sustained winds of 155 mph driving a storm surge as high as 18 feet, flinging boats and sweeping homes off foundations.

With that, the plans and the scope changed and Site Tour 360 got to test out a new workflow on the fly.

What was the solution?

The Mosaic 51 proved to be a solid piece of equipment which solved many of the issues Faraone and Vorce had encountered with previous tools.

When Faraone was how he felt using the Mosaic 51, he responded:

It should be the industry standard.

“The camera is rock solid, as far as reliability goes. We’ve been able to run it all day and the camera will keep running no matter what.

After a few days of operations I had full confidence that once I hit that button, that thing was recording and I can’t say that I’ve ever had that level of confidence for any camera that we’ve ever used. And it’s been a great experience.”

Freedom to use data as they wished

Vorce explained that they want to give their customer the end product that will be the best for them. Their natural inclination is to stay away from any proprietary software or any subscriptions.

“You should be able to use the data and own it outright without additional fees and licensing costs.That was a big draw.”

Usability, down to the last detail

Previous systems in the past required an additional step where you would have to download all of the data before you could use the camera again.

This step added significant time to the process. With the ability to remove one SSD and copy that data to a workstation while another one was in use was a huge added benefit to the new Site Tour 360 workflow.

Another key component: the power source.

“Whoever came up with the idea to power it (the camera) with those V-mount batteries – that was genius. We can run the camera all day, which previously was impossible with other cameras.”

A third important factor which really sealed the deal for Faraone who was working with the Mosaic 51 on a near daily basis at the start of the project was the webUI (user interface) that was accessible within the vehicle by any device (smartphone, tablet or laptop).

“The user interface for the camera itself is great, it’s more verbose than the competition. It’s giving you a lot more information about what’s going on with the camera.”

Learn more about how to operate the Mosaic 51 and Mosaic X cameras here.

“It is super helpful to know that. With other cameras, You have no clue. You’ve got no information. You’re just praying that it runs.”

A quick and easy workflow

A combination of many of the features above, coupled with the integrity and experience that Vorce and Faraone’s team possess created a workflow that enabled the team to quickly get data collected and up online for their customers in 24 hours, something unheard of previously.

“With your camera, with the removable hard drive, and the workflow and all that, we’ve gotten to where we can basically have stuff live within 24 hours, which we couldn’t do before.”

“..people were very surprised at how quickly we were capturing, processing and publishing…basically it would be live the next morning. And when I met with people from FEMA, they’d ask, ‘How are you doing this so quickly?’ They’re not used to it.”

How fast does this compare to previous solutions and workflow?

“I could do what it used to take two of us to do, right? And that was a project. we could boil it down to just one person. I think that that alone speaks volumes

I would estimate our workflow speed increase, about double to quadruple.”

“Yeah, from three or four days to basically being available the next morning.”

What were the results?

“We get to sleep more and be happier.“

This increased speed of data capture and processing, the ease of use, the removal of several time consuming tasks, the automation of other tasks that used to consume their post capture time. It all meant that the Site Tour 360 team could handle once difficult and stressful projects without the stress.

“I mean the camera’s beautiful…We’ve been really happy with it.”

What it means for Site Tour 360

For Mosaic customer Site Tour 360, this has meant that they are able to reduce the time needed for a project, thereby increasing their capacity as well as develop new services and offerings to their customers.

What it means for Site Tour 360’s customers

When asked how Vorce sees future collaborations with the Mosaic team:

“And it seems like you guys are pretty progressive and doing new features and new cameras and the like, so that’s kind of the company we want to be dealing with.

Using your camera has opened up our eyes to a lot of use cases and a pretty compelling product.“

Potential for Site Tour 360 with their Mosaic 51

They report that they seem themselves being able to take on more of these jobs as they now have a capable workflow that can reliably get them the data they need to produce the desired outputs for their clients.

They also will be returning to the original purpose of the purchase of the Mosaic 51 camera – utility surveying.

Vorce believes that they will be able to offer customers a different deliverable in the form of large scale surveying with pure imagery (as opposed to LiDAR) from a mobile mapping camera because,

“They need good 360 imagery so they can visually reconcile all of their assets. There really isn’t a need for lidar in many cases.”

And LiDAR just adds costs and complexity to many projects where it is not needed.

“We really are moving more and more towards these large scale collections. For utility companies, or local governments or whatever, for their asset reconciliation, building custom maps with the data; we see a big market for creating custom maps for certain types of projects. And with this (the Mosaic 51) we can get really good quality imagery. We know the GPS data is reliable.”

“We have a lot more confidence in the hardware itself in how long it’s going to take us to do a project that we’re not going to run into issues like we’ve run into with other cameras. So when we’re bidding jobs we feel a lot more confident about the time in the field and getting it done in a certain time and and you know just that that not having glitches and things that might slow a project down or or enter with us delivering, in the time frame that we need to deliver in.”

To learn more about the possibilities of Mosaic’s line of 360º mobile mapping cameras, contact us below.