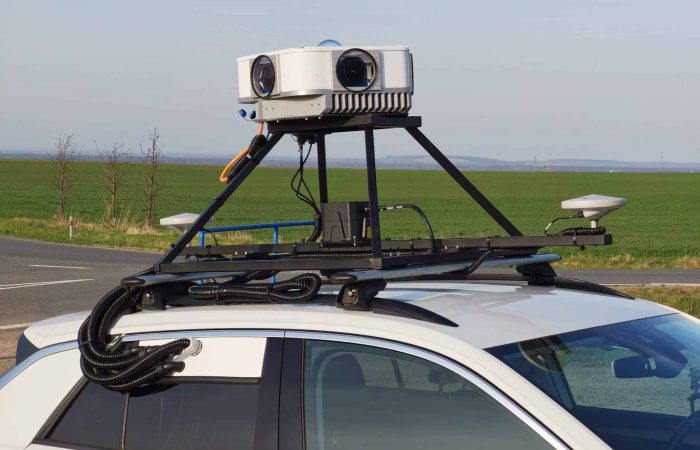 How Mosaic’s high resolution cameras are giving Field a competitive-edge in the Nordic region. Find out how they’re using each Mosaic camera to satisfy their needs and those of their customers.

We were also looking for a camera with MUCH higher resolution that could be a killer in the market.

Field is the product of the recent merger of KVS Technologies and Oslo-based Terratec (including Blom, Foran and TerraPro), making it one of Europe’s leading companies in aerial surveying, mapping, and land surveying. The company is now emerging as a total supplier of collection, analysis, and digitalization of everything physically around us.

Their mapping history (under TerraTec) goes back to 2004, starting with just 5 employees, originally focused on mapping and aerial photography activities. Over the years they increased their activities through the purchase of additional sensors, becoming one of the world’s first companies to invest in airborne laser scanning equipment. The inclusion of laser scanning mounted on vehicles garnered even more expertise in the mobile mapping industry. Field currently has 300 employees in 13 locations with headquarters in Oslo and R&D departments in several locations.

Being able to combine laser scanning from cars and trains with existing data capture methods has been valuable to our customers and has given them savings both in terms of economy and use of resources.

Field focuses a good deal of their efforts on innovation and development which has been a critical success factor of the company. Much of the company’s history comes from a curiosity and a quest to see how new technology can enable new and better ways to collect and process spatial data for the benefit of our customers.

Leading their drive for innovative ways to collect and process spatial data is Leif Erik Blankenberg, the Technical Manager at Field.

Their internal technology development department is responsible for monitoring and testing new technology, developing special solutions for collecting geodata and running development projects in cooperation with the rest of the company, customers and other stakeholders.

It was in this respect that Leif Erik and Field came to find Mosaic.

What was the problem they were facing?

Field first reached out to Mosaic several years ago looking for a 360º camera which possessed higher resolution than the LadyBug5 they were using at that time. The LadyBug5 had been used in combination with their Optech LYNX mobile mapping system since 2015.

We started using the Ladybug but still the image quality isn’t always the best and the resolution is not that good.

What was the mission?

We were also looking for a camera with MUCH higher resolution that could be a killer in the market.

On top of finding a ‘killer in the market’ they wanted to:

Field is a data collector and provider for such customers as local municipalities in Norway and surrounding countries and not the end user of the data they collect, as are many Mosaic customers. Therefore, their customers’ demand to receive higher resolution imagery drives the need to provide such material. In order to maintain current contracts and win future bids and tenders, they must provide the customers what they want.

Their biggest clients currently are the Norway Road Authority’s regional offices which until recent years was collecting data themselves with the use of ViaTech vehicles.

What was the solution?

Field now owns all 3 mobile mapping solutions from Mosaic: the Mosaic 51, the Mosaic X and the Mosaic Viking – making them the only current customer to do so.

Why did they buy all 3 Mosaic cameras?

The first purchase of the Mosaic 51 gave Field the ability to test the feasibility of the system in their own system, as well as test the relationship between the two companies.

The M51 became a vital part in testing the integration with their current mobile mapping system as they waited for the release of the Mosaic X this past summer (2022). Due to the fact that the two cameras share the same structure, framework, firmware, and connectors, they were set to start working with the Mosaic X immediately upon delivery, receiving one of the very first prototypes of the Mosaic X

The Mosaic X was added to the inventory to enable them to colorize point clouds from LIDAR.

To be able to offer higher resolution and better image quality, we’ve added the Mosaic X to that system.

And to satisfy the demands of their most particular customers, they worked with the Mosaic team of engineers and developers to design the ‘Beast’ later renamed the Mosaic Viking in their honor.

The Mosaic Viking is currently the highest resolution 360º mobile mapping camera on the market, with 6 x 31MP sensors, for a full equirectangular resolution of 180 MP, and 22K.

Why trust a new startup?

From the beginning of their research into finding a solution which could provide the desired results, Field felt confident in the solutions that Mosaic could provide, both with the (then) current offerings and the future proposed ones.

When asked ‘why’ he felt this confidence in a relatively new startup in the GIS and mobile mapping sector, Leif Erik responded,

We realized that you understood what you were talking about when we started discussions…. especially in the beginning it was Jeffrey (Mosaic CEO) that convinced us. Since he had been working with 360º imagery for a long time.

Through the early discussions, when we asked if you could build a system with higher resolution, based on the answers, we immediately realized that you knew what you were talking about.

What were the results?

Field now owns and operates each of the Mosaic devices. Leif Erik says that the addition of these devices means they are able to fulfill their desires to collect the highest quality imagery and highest resolution images for their clients.

When asked to compare the Mosaic X and Mosaic Viking Leif Erik said,

The quality of the X is quite good, so if people didn’t focus so much on resolution, I think they can work with the Mosaic X and get good results.

He further explained that for many users of mobile mapping systems, the Mosaic X offers superior image data to other solutions currently on the market. And for users who are looking for the highest quality images and resolution, the Mosaic X is the best economically priced camera that can deliver such results.

However, if they are looking for the best results and if the end user demands 100+MP images, then the Mosaic Viking is the sure way to go.

The Mosaic X is now a part of a high-end LiDAR system. In this case, the LiDAR data is the main purpose of the data collections but many clients want images as well. The LiDAR provides the necessary details to see where the asphalt needs repair.

The added benefit of the images produced with the Mosaic X lies in the fact that images provide details that LiDAR cannot, such as damages on road signs, since you can’t pick up that type of data with LiDAR.

The Viking was originally designed and created for a project in which clients requested 360º imagery to use within a viewer. These are typically municipalities in the Nordic countries. These clients find high added-value in being able to work from their offices rather than having to venture into the field to view the road conditions, utilities, and infrastructure.

This saves the end-user considerable time, allowing them to be more efficient in their daily work.

The Mosaic Viking allows the end users to

In the Nordic region, the customers are very focused on resolution, so to compete with that, you need the Viking.

Leif Erik comments on the future of Field:

Collaboration between the Mosaic and Field teams:

As is part of many B2B relationships, the interactions go beyond one or two transactions. Companies need to create and maintain relationships that build confidence and trust.

It has been a good cooperation. The entire team, including COO Jost, and VP of Engineering, Rosta, have been good to work with. It has been a pleasure working with them (all the guys). They have always delivered what they promised.

We have really trusted that you would do it at the end. It has been very good. We have been confident that you have the knowledge to do it and you have proved that.